LM to Launch Four-Part Virtual Series on Race and Racism

Rockville, MD– Leadership Montgomery (LM), a Montgomery County-focused nonprofit connecting leaders who work in the public, private and nonprofit sectors, will launch a four-part virtual series called Intentional Conversations: Race & Racism. Each 90-minute session will feature conversation scenarios from four distant viewpoints: Dialogues Between Generations; How to Support Black People When They are Not in the Room; Conversations Between Parents and Children; and How Couples of Different Races Discuss the World Today. Participants in each weekly part will witness a live discussion involving each scenario followed by an opportunity to practice their own conversation in a moderated environment. 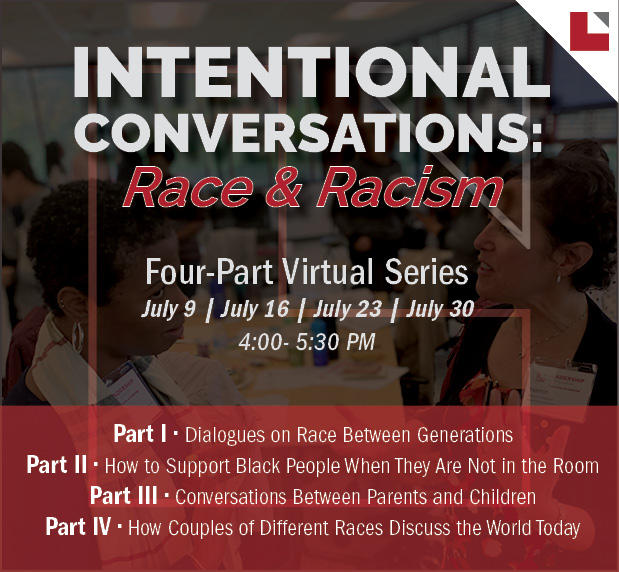 The series expands the race equity work the organization has facilitated as part of their “Leadership in Action” initiative created in 2017.

“The goal of this series is to prepare our community to have truthful conversations that can lead to meaningful action in a variety of situations” said C. Marie Taylor, President & CEO of LM. “Leadership Montgomery uniquely connects, convenes and educates leaders and the community on the critical topics that affect them. Right now, we need a strong and engaged community to address racism and embark on the work it will take to eliminate it.”

The “Leadership in Action” initiative was created as part of LM’s strategic plan following the popularity of their 2016 town hall Policing in a Post-Ferguson World. To continue the momentum of the event, the organization offered a two-day Racial Equity Workshop facilitated by the Race Equity Institute in 2018. More offerings were created as the workshop’s popularity increased.

In 2019, LM added the REAL (Race Equity Action Leadership) Inclusion program to its five existing program offerings. The eight-month program, which examines best practices for operationalizing equity within organizations and leads to a creation of a tailored race equity action plan, began its second cohort earlier this month. Planning for a third cohort is underway.

LM also added two new workshops on race and race in the workplace to its training offerings. The half-day Let’s Talk About Race Workshop begins in August while the full-day Dismantling Inequity in the Workplace training begins this fall. The organization can also coordinate private trainings for large groups and organizations upon request.

The Intentional Conversations: Race & Racism four-part series begins July 9 from 4:00-5:30 PM and continues the next three Thursdays (July 16, 23 and 30) at the same time. The cost is $45 per session or $160 for all four. Discounts are available for current LM members at $35 per session or $120 for all four. Registration is open to the public and can be found here.

For more information on all race equity offerings, click here.