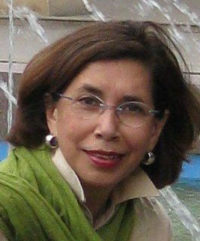 Describe what you do in your former role: I was the chief operating officer of the League of Women Voters of the United States, a national organization, with headquarters in Washington DC, 50 state offices, and 800 affiliates across the country.  My responsibilities as COO included budget, contract management, facilities management, human resources, and grant writing. In addition, I was senior director for two major education programs: (1) protecting the third branch of government – the judiciary – known as “Safeguarding US Democracy: Quest for a More Diverse Judiciary,” and (2) international programs for women around the world in the areas of leadership, governance, elections, and accountability.

Describe your community involvement:   I was very involved with the community in Montgomery County in the 1990’s. My work included working for the County’s DHHS (10 years) in charge of access to services and accountability, leading the MC Hispanic Democratic Club, representing District 16 as elected member of the MC Democratic Central Committee, member of the Hispanic Alliance, and working as an appointed member of the MC Board of Election Supervisors. After my resignation and retirement from the League in May 2013, I began to collaborate with the League of Women Voters of MC as member of the membership and immigration committees.

Favorite LM memory: A mentoring project carried out with other LM participants as part of our class responsibilities; the project included mentoring high school Latina girls. The young woman I mentored and I have continued the relationship we established during the mentorship. She graduated from high school, received an AA degree and continued for get her BA. She is now a young wife and mother with a beautiful daughter.

Favorite way to spend your free time/recharge:  Learning new things- deeply involved in learning about the US civil war, reading fiction (in English and Spanish), socializing with new and old friends, learning a new language, and traveling both domestically and internationally.

Name a leader that inspires you:  Michelle Bachelet, former president of Chile, chief of UN Women, and now awaiting a runoff election for President of Chile. Two weeks ago she received 47% of the vote. Also, Hillary Clinton for her commitment to women and girls issues. In 2012 led a United States- Tunisia civil society effort working hand in hand with Mrs. Clinton’s staff at the State Department to empower women in the Broader Middle East and North Africa area. The effort was titled “9th Forum for the Future – 2012 G8-BMENA Initiative.”